Certificate Attestation is commonly known as the process of authenticating a document to the required level so that another country will be happy to accept that it is genuine.

Kuwait is country in Western Asia. Situated in the northern edge of Eastern Arabia at the tip of the Persian Gulf, It shares borders with Iraq and Saudi Arabia. Arabic is the official language of Kuwait but English is widely spoken. It is used in business and is a mandatory second language in schools. 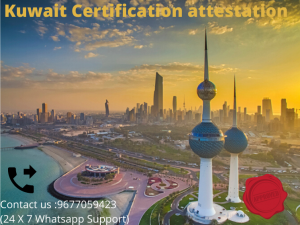 Official name of Kuwait is the “State of Kuwait”. Kuwait city is the capital and the largest city of Kuwait. It is located on Kuwait Bay, a natural deep – water harbour. The country is basically low lying with the highest point being 306m (1,004ft) above sea level.

Kuwait supplies 2.6 million barrels of Oil each day to the world making relatively a core country in the petroleum country industry, there for jobs in Oil and Gas industry are quickly and easily procured.

For more details regarding certificate attestation for Kuwait you can contact : 9677059423(24 X 7 Whatsapp Support)